An independently monitored trial was completed successfully at Lakes District Health Board. Power Solutions Limited, a Rotorua-based energy consultancy, undertook the trial between November 2015 and March 2016.

The trial
Rotorua Hospital has four water cooled chillers supplying chilled water at 6°C that is distributed throughout the hospital for cooling and dehumidification. The trial was conducted on Chiller Nos 3 and 4, both of which are Carrier Model 30XWO552P water cooled with compressors that use R134 refrigerant. Each chiller has a cooling capacity of 571kW each.

Pre-trial monitoring began on 26 November 2015 and ran for 12 days to set a baseline energy consumption. The DCI unit was also installed and operational from 17 December 2015 and the key trial ran until 4 March 2016 with continuous monitoring of key parameters, A second DCI unit was installed in parallel on 7 January 2016. Throughout the trial the existing chemical treatment of the cooling towers was isolated as the descaling process was taken over by the DCI units. pH was maintained between 8.5 and 8.8. Oxidation Reduction Potential, an indicator of corrosion, was maintained below 150mV.

Trial findings
Energy:
Energy consumption was evaluated using baseline and end of trial regression analysis formula, and a reduction of 17% was demonstrated in accumulated electrical load of the overall system. 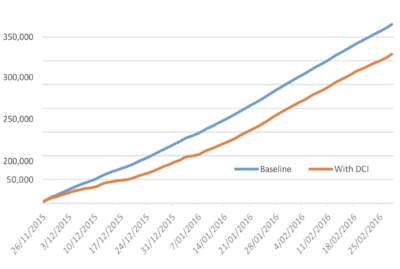 Water:
Baseline consumption was 8.5m³ per day, reducing immediately to 4m³ per day due to smaller and controlled blowdown.

System cleanliness:
It was noted as the trial progressed that scale was being loosened and falling off into the condenser water and presumed to largely come from the cooling tower media. While the loosening and removal of this scale in turn required regular regime of cleaning chiller strainers, this was seen as a positive step in the overall system cleaning and could be expected to continue for some time, progressively reducing until a clean system is achieved.